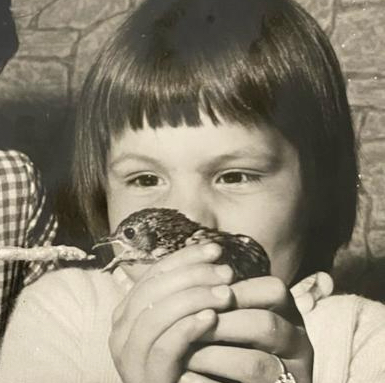 I’ve been longlisted by the Campaign fundraising to erect a statue of Emily Williamson (1855-1936), one of the founders of the RSPB, in Fletcher Moss Park, Didsbury. The images above are of the gestural maquette, and my model Francesca Cluney, to show the movement and energy of the sculpture. Of course, the final statue would have all the detail and a sharp likeness of Emily that you would expect.

Voting is now open to the public. There are 12 designs by different sculptors. Please vote for your favourite design – mine I hope! Below I explain why we need a statue and why I so want to sculpt Emily (this photo of a 6-year-old Hazel with a young Thrush gives a clue).

Why do we need a statue of Emily Williamson?

We are facing a climate emergency. Our skies are emptying of birds. Of course, a statue in itself cannot solve these problems, but it can be a catalyst for change, supporting RSPB efforts to inspire and support the new generation of young people, including girls, to value nature and understand the power of activism, and the need to fight for our birds and biodiversity.

Emily Williamson’s story is a powerful one: a young woman activist, fired up by the cruelty of the plumage trade, who had hope, who believed that change was possible, co-founded the largest conservation movement in the UK, critical in saving thousands of bird species. But the fact that the RSPB had been founded by women was little known until Tessa Boase’s marvellous ‘Mrs Pankhurst’s Purple Feather’ wrote this story back into history.

The statue tells a story of youth, passion, activism and hope 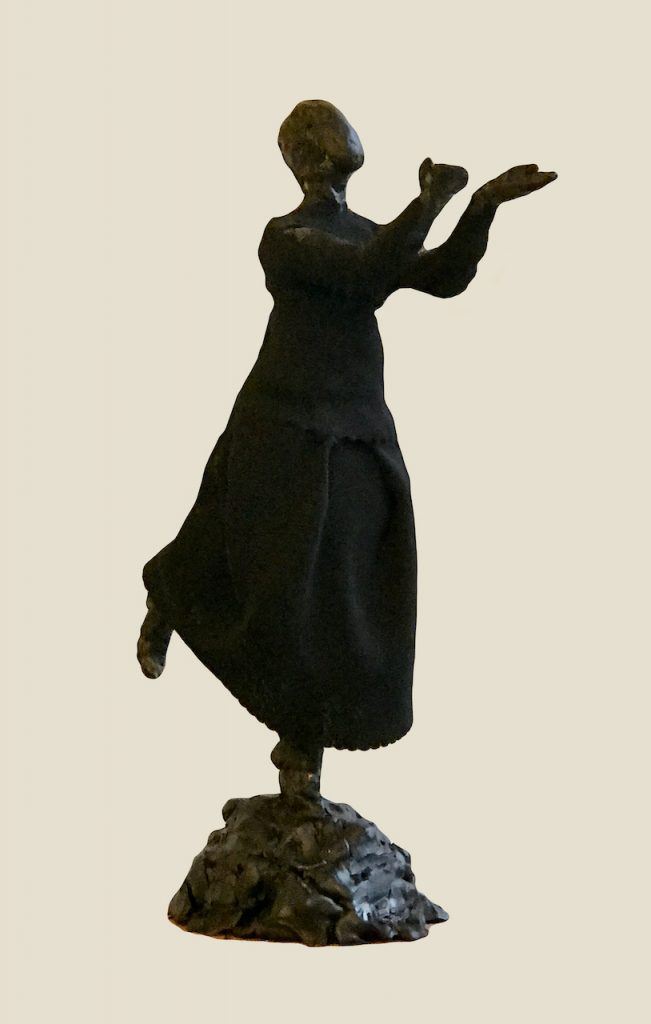 As a life-long activist for women’s rights and animal rights I know that every activist is driven by hope, a belief that change is possible. Emily Williamson would appreciate these lines written by Emily Dickinson: “Hope is the thing with feathers – That perches in our soul”. This bronze statue of Emily tells a story of youth, passion, activism and hope.

The young activist Emily Williamson, atop a rock above her beloved Alpine Gardens, releases with youthful energy a wild bird back into our skies, her face effused with joy and hope. 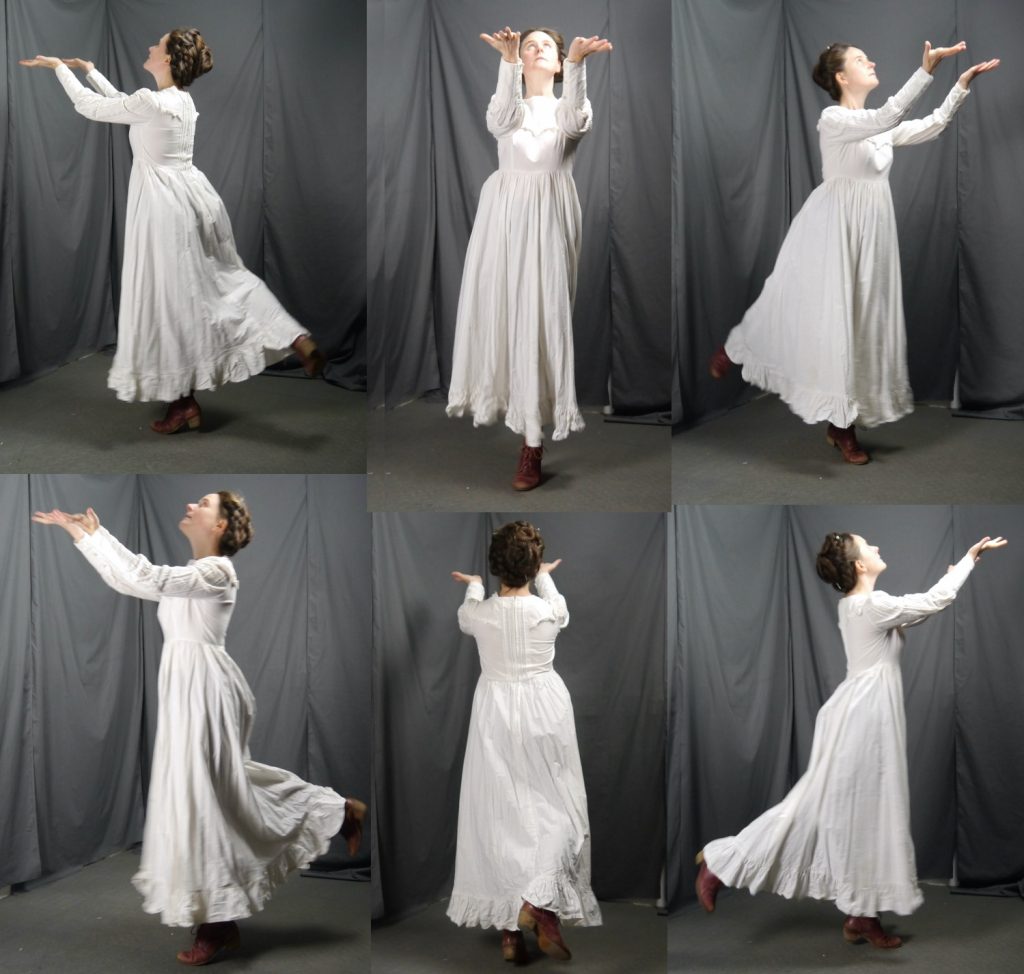 Rather than the formal Emily in ‘Sunday best’ that we meet in our only photographic portrait, we find the real teenage Emily, at her spirited best, at ease in the gardens she designed, wearing an informal day dress (see my model Francesca Cluney in the pose).

For me, there’s also an institutional symbolism. At the 1904 AGM, Emily talked of the early days of the RSPB as it being a “very small fledgling, and had no dreams of soaring to the heights it reached”. Perhaps Emily is launching that small fledgling RSPB up into those soaring heights?

Working with the community, symbols or clues to Emily and our conservation imperative will be selected – images reflecting the biodiversity we are striving for such as birds, insects, flowers, trees – which could be ‘embroidered’ into her dress hem, or etched into the rock, or form a frieze on a bronze oval plate surrounding the rock.

I am very keen to support existing excellent initiatives (Volunteers and Friends of Fletcher Moss Park, RSPB) and actively engage with a diversity of people (local residents, women’s groups, feminists involved in environmental action, local conservation groups, environmentalists, schoolchildren). I’m keen to challenge misperceptions that interest in birds and their conservation is for ‘older people’, ‘it’s a male-thing’, ‘it’s not for people of colour’. Perhaps I can use my enthusiasm for recording birdsong to engage local young people to fight for our birdlife and biodiversity?

We can enable the public, on site, to hear Emily Williamson speaking for herself. You swipe your phone across a tag, then the statue calls your mobile. Emily could speak of her outrage at ‘murderous millinery’ and why she was driven to found the RSPB. You could hear an RSPB expert guide you through how to identify the birds in Fletcher Moss Park, or explain the ecological importance of birdlife.

Why do I so want to sculpt Emily Williamson?

As a figurative sculptor I’m passionate about redressing the lack of women represented in bronze on our streets, one statue at a time. But as an activist, it’s also the political imperative of telling the story of the need to re-populate our skies and protect the diversity of bird species.

I am obsessed by birds and birdsong. My Mum ran a bird hospital from home throughout her life (see her feeding a nestling), while my Dad would take me out to the RSPB reserves around the South.

Today, I’m driven by the fear of the silent spring, and hope my artivism raises public awareness of the need to save bird species, through the creation of audio soundscapes – my Nightingale Diaries and #SpringBack birdscape series –  inspired by soundscape ecology (funded by Arts Council England).

I have just been appointed Artist-in-Residence at the Knepp Estate, the pioneering rewilding project in West Sussex achieving extraordinary results including a growing diversity of bird species. I will be recording birdscapes and bringing Knepp’s audio story of hope to urban spaces.

What is a gestural maquette?

Some have asked “Will she have a face?”. Yes, Emily WIlliamson will have all the detail you would expect from one of my statues. As a specialist portrait sculptor, I work in 3D from the start, rather than doing drawings. I first work through my ideas with a model in the studio, choreographing the story, gesture, spirit and movement of the sculpture. I then create a ‘gestural’ maquette in black wax, to get feedback. The detail comes later. Below shows the process from gestural wax maquette to the final bronze of the Emmeline Pankhurst statue in St Peter’s Square, Manchester. (Photos: Sue Anders, Nigel Kingston, Lee Webster.) 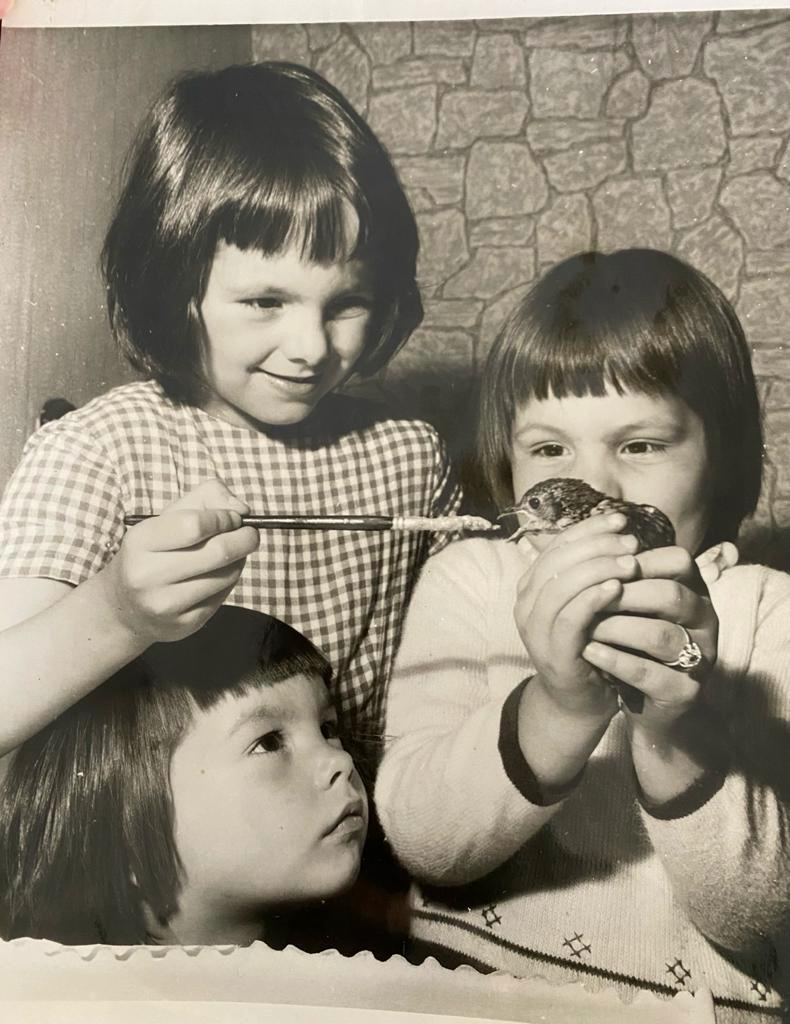