Commissioned by the Gresley Society Trust, Ms Reeves, who lives in Brighton, is putting the finishing touches to her stunning 7ft 4in likeness in bronze of the celebrated designer.

“Sir Nigel Gresley designed steam engines that pushed boundaries of both speed and elegance of design; I hope that my statue of this great engineer helps ensure his achievements are re-discovered and celebrated for generations to come.”

Gresley’s Flying Scotsman was recently seen by thousands of fans as it travelled the East Coast Mainline, from King’s Cross to York, following ten years of restoration.

Another of his famous steam engines is Mallard, which set an unbroken speed record of 126mph in 1938.

Ms Reeves’ work has been exhibited in over 60 galleries and sculpture trails UK-wide and as well as teaching at Sussex Sculpture Studios and Phoenix Brighton she is the sculpture advisor for the Hove Plinth project.

Ms Reeves’ statue will be unveiled on the 75th anniversary of Gresley’s death on Tuesday April 5 at 11am on the Western Concourse at King’s Cross station. 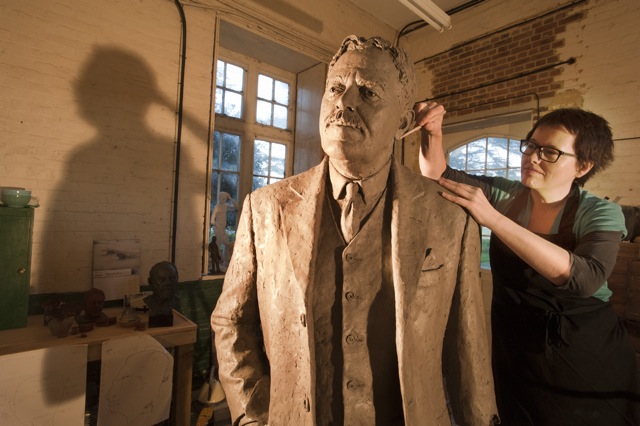 Hazel Reeves SWA FRSA is an award-winning figurative sculptor, passionate about people and their stories, with figure and portrait commissions in bronze a speciality, such as this monumental Sir Nigel Gresley statue for King’s Cross station.

Hazel is on the Council of the Society of Women Artists (SWA), a Fellow of the Royal Society of Arts (RSA) and the sculptor advising the Hove Plinth initiative. Her sculptures can be seen at Four Knoyle Road, as part of the Brighton Artists’ Open Houses, starting 7 May. For further details see www.hazelreeves.com/biography

In 2014 the Gresley Society Trust commissioned Hazel to sculpt a maquette (or scale model) of Sir Nigel Gresley, with a mallard duck at his side.

In March 2015, she was commissioned to sculpt the final 7ft 4in statue of Sir Nigel Gresley, without the mallard.

The clay of the statue has been completed, the mould made and the statue cast in bronze at Bronze Age Sculpture Casting Foundry in the Docklands, London.

‘[Sir Nigel] was one of the leading British locomotive designers of the age of steam.  A mechanical engineer of great skill, he also had the imagination and boldness to innovate, a flair to organise and to lead, an artist’s eye for line and proportion, and a touch of showmanship’, Gresley Society Trust website.

The Flying Scotsman has been in the news in the past weeks as it is back ‘in steam’ and ran the East Coast Mainline, from King’s Cross to York, after ten years of restoration costing over £4 million.