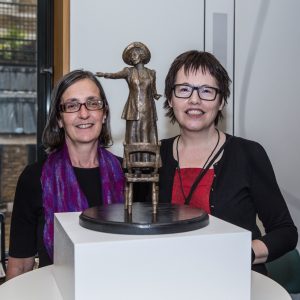 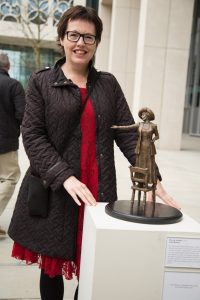 I’m incredibly excited that today the Government has recognised the legacy of Emmeline Pankhurst and Manchester in gaining women’s suffrage, by giving a major grant (£370,000) to the city to support the Emmeline Pankhurst Statue and the Pankhurst Centre. This is part of the Centenary Cities: 100 years of votes for women initiative, recognising 100 years since the first cohort of women gained the vote.

I can’t wait to get my hands in the clay. But I am also looking forward to working with local organisations, communities and schools to reflect on Emmeline’s story and the fight for women’s right to vote. The full-size bronze will be unveiled on Friday 14 December 2018, when the first women voted in a UK General Election. (Photo of Helen Pankhurst, courtesy of Emma Finch, and photo of “Rise up, women”, courtesy of Sue Anders.)

Below is the full press release:

Funding secured for Our Emmeline

The Emmeline Pankhurst Statue Campaign, which has won the hearts of Manchester and beyond, has today (15 December 2017) received the news that it is one of the projects that has won Government backing in Manchester from Centenary Cities: 100 years of votes for women with the city as a whole receiving a total of £370,000 funding.

The campaign to have a statue erected in Emmeline Pankhurst’s home city of Manchester began in 2014, when Councillor Andrew Simcock set out to address the lack of representation of women amongst the city’s statues.  From a short list of six female figures, who had all made a significant contribution to the city, Emmeline Pankhurst was selected as the clear favourite during a public vote held in 2015.

The public then went on to select sculptor Hazel Reeves’ highly acclaimed ‘Rise up, women‘ as the winning design in April 2017 from a short list of maquettes created by six sculptors.  The maquettes were exhibited at venues across Manchester including Manchester Art Gallery, HOME and Manchester Town Hall, where the public could poll their votes or make their vote online.

“They join the many Mancunians who sponsored me on my Land’s End to John o’Groats cycle ride in 2015, our gold sponsors Dennis Morgan and Edwina Wolstencroft who purchased limited edition copies of Hazel’s maquette design along with Property Alliance Group and Manchester Airport who have contributed very generously as corporate sponsors.

“All of this is of great significance because, from the outset, we have been clear that no public money from Manchester City Council would go towards the statue. Our next step will be to embark on a crowdfunding campaign to raise more money for the educational and future engagement aspects of the project.

“Subject to planning permission the statue should be unveiled on Friday 14 December 2018 – the 100th anniversary of some women voting for the first time in a UK General Election.”

The Government’s Centenary Cities will also be providing funding to the Pankhurst Centre (part of the Pankhurst Trust) in Manchester, the former home of Emmeline Pankhurst and where the suffragette movement began.

Great-Granddaughter of Emmeline Pankhurst, Patron of the Pankhurst Trust and Emmeline Pankhurst Statue Campaign, Dr Helen Pankhurst says, “It’s fantastic that the Pankhurst Centre and Our Emmeline statue have received government support. For the Pankhurst Centre this means that the house where the suffragette movement started will feature as a central part of the plans to mark the Representation of the People Act (1918), a house which also hosts a museum dedicated to the movement, an active women’s centre and undertakes legacy related outreach work.  As for the statue, Emmeline is a globally iconic figure much beloved in her home town of Manchester.  She will stand guard as an enduring reminder of the struggle for the vote, beckoning us to keep going forward as we continue the journey towards gender equality.”

Sculptor Hazel Reeves says, “I’m incredibly excited that the Government has recognised the legacy of Emmeline Pankhurst by supporting the campaign to create a statue of her. From my perspective, I can’t wait to get my hands in the clay! I want to do justice to Emmeline, and make the women of Manchester proud.”

Cllr Sarah Judge, lead member for women at Manchester City Council, says, “This is a city which played an absolutely central role in the birth of the suffragette movement and the struggle for women to secure the right to vote so it’s entirely fitting that we should play a key role in commemorating a century since that right was secured.  It’s just as fitting that the inspirational part played by Emmeline Pankhurst should be immortalised.”

The Emmeline Pankhurst Statue Campaign has been fundraising since 2014 to create both a statue and to ensure that a programme of community engagement and education runs alongside this.  This programme will begin next year to run alongside the creation of the statue, which will be unveiled on Friday 14 December 2018, when the first women voted in a UK General Election for the first time.