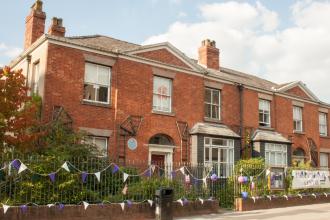 “It was in October, 1903, that I invited a number of women to my house in Nelson Street, Manchester, for purposes of organisation. We voted to call our new society the Women’s Social and Political Union…”  from My Own Story, by Emmeline Pankhurst

I’m delighted to be a Pankhurst Ambassador. I have huge admiration for the Pankhurst Trust’s role in sharing the Pankhurst and suffragette legacy, inspiring a new generation of activists, and its safeguarding of this iconic site of women’s political action at 62 Nelson Street.

If you are in Manchester, visit the Emmeline Pankhurst statue in St Peter’s Square followed by a trip to the Pankhurst Centre:

The Pankhurst Centre is open to visitors on Thursdays from 10am – 4pm and from 1pm to 4pm on the 2nd and 4th Sunday of the month. Entry is free, but donations welcome.